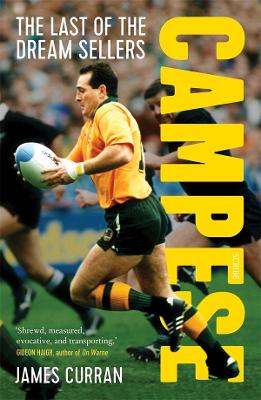 Once hailed as the 'Bradman of Rugby', David Campese thrilled spectators both in Australia and overseas with his footloose, crazy-brave style of free running. This book tells the story of his rise from humble beginnings to the very top of a global sport.

As a rugby player, David Campese seemed to operate on pure instinct, one that left many a defender clutching for him in vain, stranded in the slipstream of his audacity. He followed no straight path, observed no convention, and in so doing brought a whole swag of new supporters to the game. Hailed as the 'Bradman of Rugby' by former Wallaby coach Alan Jones, and the 'Pele' of Rugby by others, Campese was a match-winner. True, he could lose the odd game as well, but this was part of his unique allure- Campese took crowds to the edge of their seats ... and their patience.

The refrain 'I saw Campese play' now speaks to much more than wistful reminiscences about a player widely regarded as the most entertaining ever to play the game of Rugby Union. It has come to represent a state of chronic disbelief that the Wallaby ascendancy of Campese's era - the style, panache, and winning ways of the Australian team in the 1980s and 1990s - has now been squandered by Rugby's continuing struggle to adapting to the coming of professionalism.

Campese occupies a unique intersection in the sport's history- one of its last amateurs, and one of its first professionals. The rigid, robotic game of today appears incapable of accommodating a player of his dash and daring, or of replicating his teams' successes.

'A smart writer pursues one of Australia's most elusive and enigmatic champions. The result is shrewd, measured, evocative, and, at times, transporting.'
-Gideon Haigh, author of On Warne

'David Campese could impact a rugby field like a shooting star in the night sky, and James Curran's masterful account lifts us into that stratosphere ... As a rugby entertainer and show stopper, Campese was simply the best. Finally, here is a book that does this one-off player justice.'
-Gordon Bray, veteran sports commentator