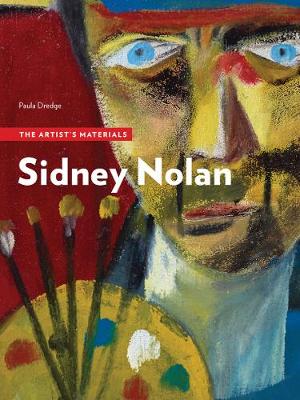 The newest addition to the Artist's Materials series offers the first technical study
of one of Australia's greatest modern painters.

Sidney Nolan (1917-1992) is renowned for an oeuvre ranging from views of Melbourne's seaside suburb St. Kilda to an iconic series on outlaw hero Ned Kelly. Working in factories from age fourteen, Nolan began his training spray painting signs on glass, which was followed by a job cutting and painting displays for Fayrefield Hats. Such employment offered him firsthand experience with commercial synthetic paints developed during the 1920s and 1930s.

In 1939, having given up his job at Fayrefield in pursuit of an artistic career, Nolan became obsessed with European abstract paintings he saw reproduced in books and magazines. With little regard for the longevity of his work, he began to exploit materials such as boot polish, dyes, secondhand canvas, tissue paper, and old photographs, in addition to commercial and household paints. He continued to embrace new materials after moving to London in 1953. Oil-based Ripolin enamel is known to have been Nolan's preferred paint, but this fascinating study-certain to appeal to conservators, conservation scientists, art historians, and general readers with an interest in modern art-reveals his equally innovative use of nitrocellulose, alkyds, and other diverse materials.