The Little Book of Cricket 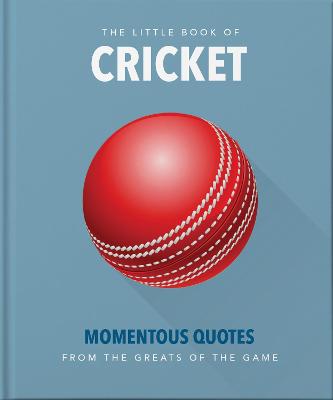 Cricket is blessed with quality prose and gifted writing.

The nobles and gentlemen who brought the game of cricket from England's villages to the pavilion at Lord's were often as equally blessed with the gift of wit and banter as they were with leather and willow. Their turns of phrase, intellectual insights and outlandish observations were as likely to knock you for six as to leave you stumped.

The Little Book of Cricket encapsulates their often hilarious, sometimes sombre and occasionally downright bizarre quotes as the greats of the game, from Don Bradman to Steve Waugh and Ian Botham to Freddie Flintoff, all describe their beloved sport in their own words.

'He's got it, England have won the World Cup by the barest of margins...Absolute ecstasy for England, agony, agony for New Zealand.' - Ian Smith, New Zealand commentor, calling that crucial final ball of the super over.

'He lifted the game from a state of conventional excitement to one of unbelievable suspense and drama and finally into the realm of romantic fiction.' - Henry Blofeld, on a then 18-year-old Ian Botham, 1974.