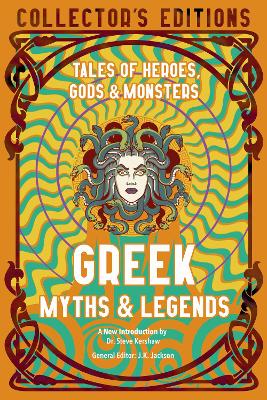 Gorgeous Collector's Edition. From the birth of Zeus, to Prometheus, Pandora and Helen of Troy, Odysseus and Jason and the Argonauts, the myths of the Greeks and, later, the Romans, are passionate and powerfully told. The Gods are jealous of each other's powers, subject to mighty outbursts of love and always seeking vengeance. The dark forces of the ancient world were held at bay by the resourceful and emerging civilization that formed the basis of Western culture, providing a tradition of fabulous tales that are retold here. Flame Tree Collector's Editions present the foundations of speculative fiction, authors, myths and tales without which the imaginative literature of the twentieth century would not exist, bringing the best, most influential and most fascinating works into a striking and collectable library. Each book features a new introduction and a Glossary of Terms. AUTHORS: Jake Jackson has written, edited and contributed to over 20 books. Related works include studies of Babylonian creation myths, the philosophy to time and William Blake's use of mythology in his visionary literature. Dr Steve Kershaw (introduction) is the author and tutor of Oxford University's Greek Mythology: Online course, a lecturer for the V&A, a guest speaker for various cultural travel companies, and was an expert contributor to the History Channel's Barbarians Rising series. His publications on Greek mythology include The Penguin Dictionary of Classical Mythology (editor, 1999), A Brief Guide to Greek Mythology (Robinson, 2007), A Brief History of Atlantis: Plato's Ideal State (Robinson, 2017), and Mythologica (Wide-Eyed Editions, 2019), which was Amazon.com's Best Children's Non-Fiction Book of 2019 and was nominated for the Kate Greenaway Award.